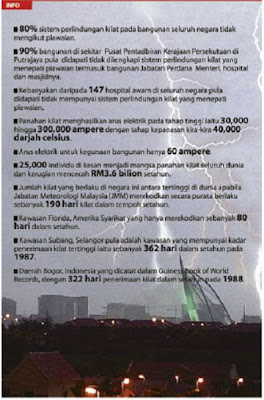 JOHOR BARU: Thirty-six families were left homeless in Taman Desa Mutiara here after the roof of their apartment block was destroyed in a fire which was sparked by lightning.

Resident Rosdi Rahman, 43, blamed the fire on thieves who stole the earth wire from their building several weeks ago.

“Their irresponsible act has now caused many of us to lose our belongings,” he said, adding that the fire was first noticed by his 17-year-old son who was outside the block.

Rosdi said he heard the sound of thunder before his son started yelling for people to get out as there was a fire.

“When I came out of my flat, I noticed the flames and quickly knocked on all the doors of my neighbours to warn them,” he said, adding that more than 400 people reside in the block.

Another resident, Baidanah Awang, 45, said that her unit was on the top floor of the building.

“When I looked out, I saw families rushing down the staircase and I quickly grabbed my children and fled,” she said.

“We managed to put out the fire in two hours but we are still investigating its cause as well as the damage incurred,” he said, adding that strong winds and the asbestos roofing caused the fire to spread very quickly.

No one was injured during the incident but the roofs of 36 units were totally razed.

State Secretary Obet Tawil, who was at the scene, said that arrangements had been made to provide temporary shelter, food, clothes and other necessities to the 180 people affected.

“The victims will be placed at the Dewan Bukit Mutiara,” he said.