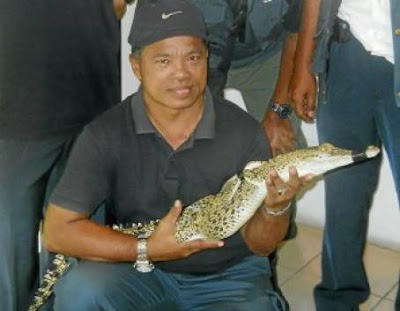 SEREMBAN: The baby estuarine crocodile at City Park, Seremban 2, which became the talk of the town recently, was captured after it ate some tilapia fish, used as bait and attached to several fishing rods laid around the lake.

Eleven rods were laid around the lake since 9pm on Wednesday.

State Wildlife and National Parks Department (Perhilitan) director Mohd Zaide Mohamed Zin said one of their staff inspected the rods at 7.20am yesterday and found that the crocodile had taken the bait from one of them.

He said the male baby crocodile, which is about 1.03 metres in length and weighing 2.75kg, suffered no injuries.

"It will be sent to the Paya Indah Wetlands in Dengkil, Selangor."

Zaide said the baby crocodile had earlier taken the bait when the department tried to capture it on Jan 18, but managed to get away when the line snapped.

He said the department had been trying to capture the crocodile since reports of its sighting surfaced on Jan 10.

Apart from using the fishing lines, they had also tried using a fish trap but were unsuccessful.

He said they took a long time to catch the reptile as the lake was very big and there were many sewerage pipes, making it easy for the crocodile to hide, while the presence of so many people also scared the crocodile which remained out of sight.

"Crocodiles normally eat meat, but we used tilapia as we believe the reptile had been eating fish, as it was the only food source in the lake."